What's Wrong With The Book For Teens? 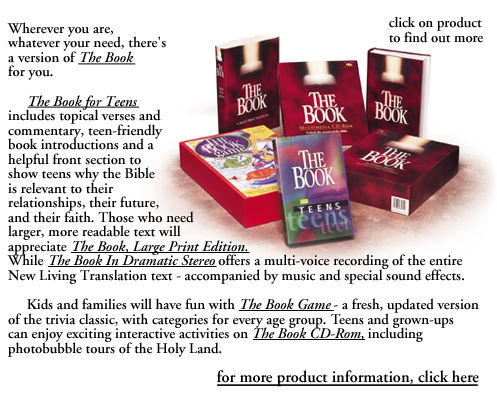 It never surprises me to find out more Christians are spiritually blinded by the Truth. A perfect example of this is: The Book for Teens (TBFT). To be frank, TBFT is just a money making scam. If you purchased "The Book", you have been deceived by Satan with this counterfeit "Bible." (TBFT comes from the New Living Translation)

Whenever a "new" Bible is published onto the Market, without fail, there's always something wrong with it. Look at the picture at the top of this page --you are urged to buy all sorts of things relating to "The Book," but if you go to their website at www.ireadthebook.com, they have NO plan of Salvation!  They give you all this "wonderful" stuff to buy, but they don't present to you how to get saved and go to Heaven!

If you think I'm lying, just go to their website and on the main page you'll find nothing but advertisements for their products, but the Lord Jesus is not found! Why am I making such a big deal about this? The Bible clearly tells us NOT to love money because it will lead us to do Evil!

"For the love of money is the root of all evil: which while some coveted after, they have erred from the faith, and pierced themselves through with many sorrows." -1st Timothy 6:10  KJB

That is exactly what these people are wanting from you --YOUR MONEY!  They know religion is a big money maker, so they create a cheap counterfeit bible and claim it as God's Word! And we, as Christians, are so foolish to actually fall for this deceit! Before we know it, we have spent hundreds of dollars on "The Book" and it's related products.  But what about the unsaved person that wants to get saved? Not one article on their website explains how to get saved. That's sad!  Is this what Christianity has deteriorated to --an unethical and quick way to make a lot of money?  It is wrong to corrupt God's Word to make money.

Corrupted Scriptures in The Book For Teens

TBFT perverts the Godhead, completely removes It from the Bible!

1st John 5:7 is a vital Scripture that EVERY Christian should know.  This Scripture clearly proclaims that God the Father, God the Son, and God the Holy Ghost are ONE.  But, TBFT says otherwise...

KJB - "For there are three that bear record in heaven, the Father, the Word, and the Holy Ghost: and these three are one."

TBFT - "So we have these three witnesses."

What blasphemy!  Many Christians have bought into the lie that 1st John 5:7 wasn't in the originals --IT WAS!  It depends on which originals you're talking about.  The Textus Receptus (or received text) from which our reliable King James Bible comes DOES contain 1st John 5:7.

"And the Holy Ghost descended in a bodily shape like a dove upon him, and a voice came from heaven, which said, Thou art my beloved Son; in thee I am well pleased."

KJB - "For the invisible things of him from the creation of the world are clearly seen, being understood by the things that are made, even his eternal power and Godhead; so that they are without excuse:"

TBFT - "From the time the world was created, people have seen the earth and sky and all that God made. They can clearly see his invisible qualities--his eternal power and divine nature. So they have no excuse whatsoever for not knowing God.

One of the most popular attacks that unbelievers launch against Christians is to say that the word "trinity" is not even found in the Bible.  The best defense is to show them the multiple Scriptures in the Word of God which teach about the GODHEAD.  Tragically, the word "Godhead" isn't even mentioned in TBFT.  What?  Yes, that is correct...some "accurate" translation huh?  This is why I confidently say that The Book For Teens is straight from Hell.  Here's Acts 17:29 compared...

KJB - "Forasmuch then as we are the offspring of God, we ought not to think that the Godhead is like unto gold, or silver, or stone, graven by art and man's device."

TBFT - "And since this is true, we shouldn't think of God as an idol designed by craftsmen from gold or silver or stone."

Many cults (such as Islamic Muslims and Jehovah Witnesses) acknowledge the existence of a god, but deny the Godhead.  It is tragic that so many believers are supporting these modern versions that maliciously attack the Godhead and Jesus' deity.  Look what they've done to Colossians 2:9...

KJB - "For in him dwelleth all the fulness of the Godhead bodily.

NLT - "For in Christ the fullness of God lives in a human body."

Supposedly, TBFT is based upon the NLT, but there are subtle differences.  For example, I noticed a tiny asterisk mark (*) next to Colossians 2:9 in the NLT.  I looked to the bottom to see what the footnote said... "Greek in him dwells all the fullness of the Godhead bodily."  Do you see what is happening here?  To make everybody happy, the NLT Bible-corrupters completely removed "Godhead" to appease the liberals, but then they've also placed the truth in a little footnote in an attempt to appease conservative protestants.  Why in the world would they not place the literal Greek translation in Colossians 2:9?  Why would they only put the correct Greek translation in a tiny footnote at the bottom of the page?  Do you know what happens in the making of a new bible?  It's kind of like the bargaining table at contract time between the union and company management.  All the different religious denominations are invited to the bargaining table and a meeting is held to decide what COMPROMISES must be made to make the "new" bible acceptable to their particular denomination.  This is all done in an attempt to reach the largest market base possible.  By the time the new corrupted bible is finished, without fail, the Godhead (trinity) and the deity of Jesus Christ are greatly diminished.  TBFT is even worse than the NLT, they don't even give you a footnote to the truth...it is pure heresy!   This is why I love the old King James Bible, it proudly proclaims the Godhead and the deity of our Precious Lord Jesus Christ.

One of the most important verses in the Bible is John 3:16.  TBFT perverts this verse by removing the word "begotten," thus saying that God only has one son.   But 1st John 3:1 in the KJB reads, "Behold, what manner of love the Father hath bestowed upon us, that we should be called the sons of God: therefore the world knoweth us not, because it knew him not."  Clearly, God has many sons, but Jesus is the only BEGOTTEN Son of God, which makes Jesus God.

KJB - " "For God so loved the world, that he gave his only begotten Son, that whosoever believeth in him should not perish, but have everlasting life." -John 3:16

TBFT - "For God so loved the world that he gave he gave his only son, so that everyone who believes in him will not perish but have eternal life." -John 3:16

"For ye are all the children of God by faith in Christ Jesus." -Galatians 3:26  KJB

Jesus claimed to be Almighty God in Revelation 1:8.  For anyone to diminish 1st Timothy 3:16 to a mere "Christ appeared in the flesh" is ridiculous.  Any idiot knows that Jesus appeared in the flesh!  But the KJB declares that GOD was manifest (or revealed) in the fleshly body of Jesus Christ.  It angers many people when you promote the deity of Christ, thus the reason why ALL modern bibles attack Jesus' deity.

KJB - "Who, being in the form of God, thought it not robbery to be equal with God."

TBFT - "Though he was God, he did not demand and cling to his rights as God."

TBFT cleverly corrupted Philippians 2:6 by removing the word "equal."  In so doing, they have lowered Jesus to the God of the Jehovah Witnesses.  JW's teach that Jesus is "a god," but not Almighty God, which is a lie of the Devil.  By saying that Jesus is "equal" with God, the KJB is clearly declaring Christ as Almighty God.

As further proof of TBFT attack on Jesus' deity, look at Colossians 1:16...

TBFT - "Christ is the one through whom God created everything in heaven and earth."

Blasphemy!  The KJB declares that Jesus created all things, but TBFT wrongfully teaches that God created all things through Jesus.  This is exactly what the Jehovah Witnesses cult teaches.  JW's deny Christ's deity (as do most cults).  JW's teach that God created everything THROUGH Jesus.  On the contrary, the KJB proclaims in Colossians 1:16 that Jesus Christ created all things Himself.  It is wicked heresy to say that Jesus did not create the universe by His own Word.  John 1:10 reads, "He was in the world, and the world was made by him, and the world knew him not."  Sadly, TBFT perverts this Scripture also, claiming that God created the universe "through" Jesus instead of "by" Jesus as the Word of God teaches in the KJB.  The JW's would be proud of TBFT.  Oh listen friend, you need to burn your TBFT because it dishonors and dethrones the Lord Jesus Christ.

TBFT perverts Acts 12:4 by changing "Easter" to "Passover."  Numbers 28:16,17 clearly teaches that the seven days of unleavened bread FOLLOWED the day of Passover.  Acts 12:2 in the KJB tells us that the days of unleavened bread were already being observed, which means that the day of Passover was OVER!  So when the NIV and TBFT say that Herod was waiting for the Passover in Acts 12:5, they are lying!  The KJB wisely uses the proper word "Easter" because the Passover had already occurred.

TBFT completely removes the word "sodomite" from the Bible

God describes homosexuals with the word "sodomite" for a reason.  Jude 1:7 reads, "Even as Sodom and Gomorrha, and the cities about them in like manner, giving themselves over to fornication, and going after strange flesh, are set forth for an example, suffering the vengeance of eternal fire."  The word "sodomite" comes from the city of Sodom, a city so vile and wicked that God decided to utterly destroy it by reigning down fire and brimstone from Heaven.  We read of the woeful homosexuality problem in Sodom in Genesis 19:4, 5.  American society has plunged horribly into wickedness and apostasy, even to the extent of corrupting the Bible for the sake of being politically correct to make money. 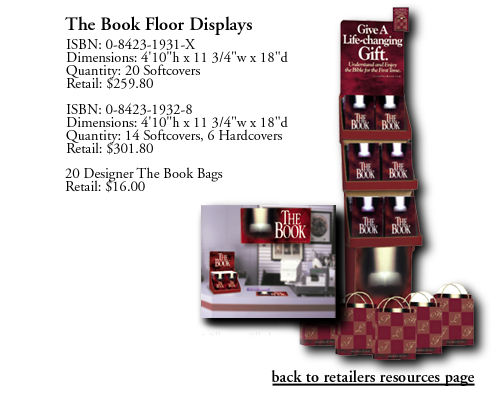 Look at the prices in the picture above...it's just so wrong!  I can't help but think of the Words of Jesus in Luke 19:46, "My house is the house of prayer: but ye have made it a den of thieves."

TBFT is filled with doctrinal heresy and wishy-washy articles!

I beg of you, if you have or own a copy of this EVIL book (TBFT), throw it into the garbage.  Or better yet, destroy it so no one else will find it and read it.  TBFT needs to be exposed.  So many people are being kept from the truth because of publications like TBFT that feel compelled to explain everything to it's reader.  Teens are far more likely to rely upon the guidance of TBFT's instructional lessons than they are the bible itself.  The Book For Teens is chock-packed full with spiritually misguiding comments and articles.  There are two major problems:

The KJB is available to read for FREE on the Internet! As a Christian you need the incorruptible Word of God (1st Peter 1:23).  If you're reading TBFT or some other modern perversion of the bible, you have a CORRUPTED Bible!  The KJB has been proven over the centuries.

"If the foundations be destroyed, what can the righteous do?" -Psalm 11:3