It is Sinful for Men to Wear Kilts! 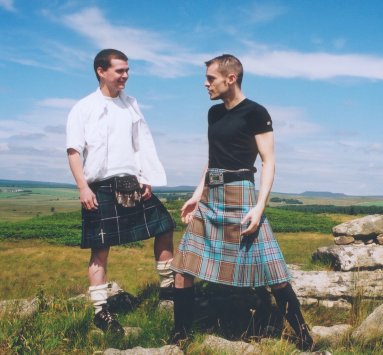 One only has to look at the above photo to see what's wrong with kilts or skirts on men. It's disgusting!

"The woman shall not wear that which pertaineth unto a man, neither shall a man put on a woman's garment: for all that do so are abomination unto the LORD thy God." -Deuteronomy 22:5.  This Scripture naturally raises questions as to--what is men's and women's clothing?  The Bible warns effeminate men in 1st Corinthians 6:9-10, "Know ye not that the unrighteous shall not inherit the kingdom of God? Be not deceived: neither fornicators, nor idolaters, nor adulterers, nor effeminate ... shall inherit the kingdom of God."  Let's establish from the start, that the Word of God condemns effeminate men.   "Effeminate" in 1st Corinthians 6:9, comes from the Greek, "malakos," which means "soft, i.e. fine (clothing)."  We read in VINE'S COMPLETE EXPOSITORY DICTIONARY OF OLD AND NEW TESTAMENT WORDS, concerning the word "effeminate" ... 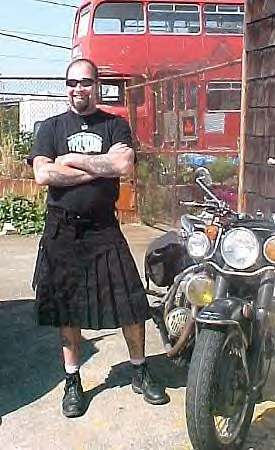 Although 1st Corinthians 6:9 is clearly condemning homosexuality and cross-dressing, it is also equally clear that any form of femininity in a man is sinful.  This is why Deuteronomy 22:5 condemns men wearing women's apparel.  Clearly, it is not acceptable for men to wear women's clothing.  Men are to be men!  Men should talk like men, dress like men, walk like men, and act like men.  Kilts on men are sissyish.  Although a man wearing a kilt may be tough, the skirt makes him look silly and foolish.  Although most men who wear kilts aren't gay, it makes one wonder why any man would ever want to wear clothing that is considered women's apparel by 99% of the population.  A quick look at any bathroom door will quickly reveal that men wear pants, and women wear dresses.

Jesus said in Matthew 11:8, "But what went ye out for to see? A man clothed in soft raiment? behold, they that wear soft clothing are in kings' houses."  John the Baptist was rugged, as a man should be.  The men who lived in the palace wore "soft" clothing, i.e., they didn't look or act like REAL MEN.  I've never seen a construction worker wearing a kilt.  I've never seen a truck mechanic or a coal miner wearing a kilt.  I only see men with clean jobs, or playing bagpipes, wearing kilts.  Kilts are for men in the palace, not for John the Baptist type men ... real men!

Did men Wear Skirts in the Old Testament? 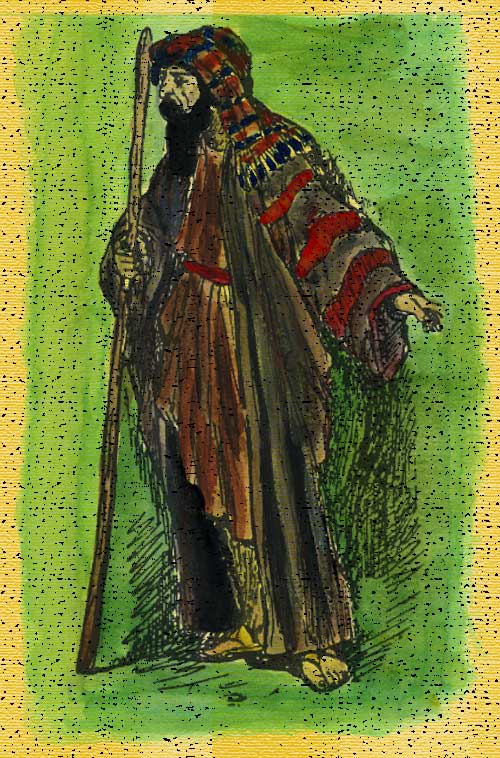 No, they wore robes with outer skirts.  This is VERY different from the skirts we see today.  The photo to the right shows what men wore in the Old Testament.  This is NO kilt!  We read in 1st Samuel 24:5, "And it came to pass afterward, that David's heart smote him, because he had cut off Saul's skirt."  David had been running for his life from king Saul.  While Saul and his men were sleeping, David infiltrated the group and cut off a piece of Saul's "skirt."  However, the Bible reveals that the skirt was simply a part of Saul's robe, and not a skirt by itself.   This is evidenced by 1st Samuel 24:11, "Moreover, my father, see, yea, see the skirt of thy robe in my hand: for in that I cut off the skirt of thy robe and killed thee not, know thou and see that there is neither evil nor transgression in mine hand, and I have not sinned against thee; yet thou huntest my soul to take it."  Although Verse 5 says "skirt," it is abundantly clear from Verse 11 that Saul was NOT wearing a short skirt like a women.   Saul had a robe, with an outer skirt.

The FACT that men did NOT wear skirts in the Bible is further evidenced by the words of Ruth to Boaz in Ruth 3:9, "And she answered, I am Ruth thine handmaid: spread therefore thy skirt over thine handmaid; for thou art a near kinsman."  If Boaz was wearing a skirt, like many people today contend, then Boaz would have had to remove his skirt in order to spread it over Ruth.  Which means Boaz would have been either partially or completely naked.  This didn't happen!  Furthermore, Boaz and Ruth weren't married until Ruth 4:13, so there was no physical relationship between Boaz and Ruth at the time of Ruth 3:9.  So what did Ruth mean when she asked Boaz to spread his "skirt" over her?  She was simply saying, "Take me to be yours."  She wanted Boaz to take her under his outer skirt, under his wing so-to-speak.  It would be absurd to interpret this Scripture any other way.

Now think of a man in a kilt, and try to imagine how he would "spread his skirt" over someone.  It would be impossible while he was wearing it.  Clearly, men in the Old Testament didn't wear the type of skirts or kilts, which some uncouth (lacking refinement or cultivation or taste) men wear today.  There's just something uncouth about a man wearing a kilt!

Women in the Old Testament also wore robes with skirts; but they were more feminine, cut differently, and made with more feminine materials.  Clothing which was transparent, tight fitting, loosely worn, or exposed intimate parts of the body were considered the ATTIRE OF A HARLOT (Proverb 7:10).